We are happy to publish the German translation of 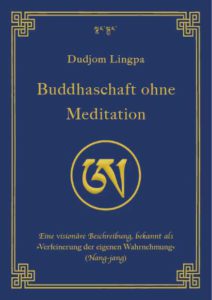 This text presents the view of the Great Perfection through the approach known as trekchö (cutting through solidity). Buddhahood Without Meditation is widely known by its subtitle, Nang-jang (Refining Apparent Phenomena). This second, revised edition is the result of a thorough re-examination of the original English translation done in an effort to clarify the terminology and meaning of Dudjom Lingpa’s text for Western students of the Great Perfection.

The glossary has been revised accordingly and expanded to incorporate new terms. It also includes the Tibetan text as edited by H.H. Dudjom Rinpoche, as well has his structural analysis and outline. “The Nangjang was prepared as an inexhaustible treasure trove of the gift of the Buddha’s teachings, the relics of the dharmakaya.” ~ H.H. Dudjom Rinpoche

Nang-jang (refinement of perception) is the name given to a visionary text of the Tibetan Dzogchen tradition, in which the Dzogchen master, Dudjom Lingpa, experiences visionary visitation from fourteen awakened beings, including Avalokiteshvara and Longchenpa, who teach him of the illusionality of all things and their ultimate dependence upon a universal ‘ground of being’.

According to the teachings bestowed upon Dudjom Lingpa by the highly advanced spiritual beings who visit him in this text, all phenomenal, sensible things are empty and illusory. Yet there is that which is not separate from them, nor they from it, and which can be described as the ‘ground of being’. Orgyan Tsokyey Dorje (one of the spiritual visitants) states:

The text also tells of how the Buddha nature, the heart of awareness, is utterly pure and lucid and constitutes the very life essence of all things, both samsaric and nirvanic. Ekajati declares:

‘Since the fundamental nature of awareness, buddha nature, is pristine and lucid, free of sullying factors, it is “utter lucidity”. Since it is endowed with the seven indestructible vajra [diamond / adamantine] attributes, it is “vajra”. And since it abides as the vital essence of all phenomena of samsara and nirvana, it is “heart essence”.

This is ultimate reality, a state of truth beyond ordinary mundane consciousness and beyond the power of words to describe. It is designated by Zurchhung Sheyrab Dragpa in the text as ‘a supreme and inexpressible state’, the ‘fundamental nature beyond ordinary consciousness’.[5] The practitioner of this spiritual path is urged to strive for obtaining of an ultimate all-knowingness which transcends time:

‘Hold this to be the most excellent key point – to practice with intense and unflagging exertion until you attain supreme timeless awareness [jnana], which is total omniscience.

This entry was posted in Books, German Books, New Publications and tagged Dzogchen. Bookmark the permalink.