A Roll Of Thunder From The Void

Developing the deity through mantra recitation and establishing the sacred maṇḍala 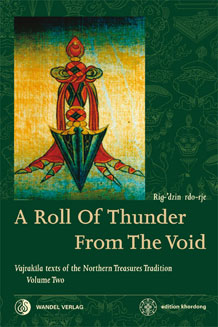 This important collection of teachings from the Northern Treasures Vajrakila cycle includes liturgical practice texts (sadhana) from the original treasure revelations, together with explanatory notes and commentaries by the 17th century master Padma ’phrin-las on how to take these practices into a closed retreat and employ them for the highest benefit of oneself and all living beings.  Having become empowered in the mandala of Vajrakila by a master guru, trainees may use the skilful esoteric techniques, described herein, in order to develop a profound experiential certainty of the true nature of reality.  These texts are manuals, designed to be studied by disciplined individuals who wish to train themselves in skilful altruism.  They are traditional methods for overcoming the instincts of egoistic self-interest, allowing the mind to become focussed on the general welfare of the world, so that beneficial changes of great social value may be brought about in both thought and behaviour.

Painstakingly researched and annotated, this volume includes English translations of eight important texts, together with much of the original Tibetan.

Within the instructions for the preparation and protection of the retreat area are hitherto unpublished details of the means to suppress the various classes of afflicting demons (sri) that are potential causes of downfall for all tantric yogins.  This is an ancient and vital aspect of vajrayana ritual practice that has been much neglected until now.

From the foreword:
“My previous study of the ’Bum nag, Tibet’s most authoritative literary overview of the entire tradition of Vajrakıla, revealed the history of the Vajrakıla doctrines and analysed their twofold purpose. The present work goes directly to the essential core and offers the reader those very meditations by means of which such twofold purpose may be accomplished. As stated in the ritual text, “Padmasambhava studied the hundred thousand sections of the Kılavidyottama-tantra and then practised for twelve years in the rock cavern of gYa’-ri-gong. The ritual form of his practice is exactly the one given here.” The amazing results of the great guru’s meditation in gYa’-ri are well known. As it is written in the gSol ’debs bar chad lam sel:

At the time when you introduced the jina’s doctrines [to Tibet]
You accomplished your practice in the forest around gYa’-ri.
The kıla of your ritual service rose up to the vault of the sky
And you caught it with a vajra gesture.
Rolling it between the palms of your hands,
You threw it into the sandalwood forest
And the resulting blaze even dried up the lake.
Thus the abode of wicked heretics was completely destroyed
And the evil spirits [that they served] were annihilated.
As the destroyer of Mara, you have no equal!

Thus, for those who have studied the ’Bum nag and wish now to absorb themselves in such powerful meditation for the destruction of Mara, this book is offered.”

Rig-’dzin rdo-rje (Martin Boord) studied with Lama Khamtrul Yeshe Dorje, Chhimed Rigdzin Rinpoche and Dudjom Rinpoche.  At the university of London he received a doctorate for his thesis “The Cult Of The Deity Vajrakila.”  Currently he lives with his wife in quiet seclusion in the Cotswolds, devoting himself to the study of the Northern Treasures. More information about Martin Boord you will find here.

Further books in this series of the Vajrakila texts of the Northern Treasures Tradition (Byang-gTer Phur-Pa) are planned or already released:

Vol.1  Gathering the Elements A detailed study of the Vajrakila tradition, looking at its origins, significance and lines of transmission, as well as a history of the Northern Treasures (Byang-gter) school and an overview of the approximately 200 available texts of Vajrakila that it maintains.  This book is a new and completely revised edition of the study formerly published as The Cult of the Wrathful Deity Vajrakila, incorporating the latest research on the subject and freshly translated material.

Vol.2  A Roll of Thunder from the Void Including ritual practice texts (sadhana) from the original treasure revelations, together with explanatory commentaries by the master Padma ‘phrin-las on how to employ these practices for the highest benefit of oneself and all living beings.  Within the instructions for the preparation and protection of sacred space are details of the means to suppress the various classes of afflicting demons (sri) that are potential causes of downfall for all tantric yogins. See above.

Vol.3  A Blaze of Fire in the Dark Rituals for fire sacrifice (homa), traditionally performed at the end of a retreat, and rites of empowerment (abhiseka).

This entry was posted in Books, English Books, Vajrakila Series. Bookmark the permalink.