Good… in the beginning, the middle, and the end! 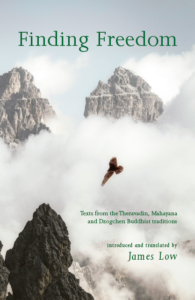 That’s a truth of the buddha-dharma and so it is with the three approaches to awakening elucidated in this book. ‘Finding Freedom’ contains recent revisions of texts from the Theravadan, Mahayana and Dzogchen traditions.  James Low originally translated these texts under the guidance of Kyabje C.R. Lama, one of the main Nyingma lamas of our time and each of these 287 pages is itself a treasure not to be missed.
The three approaches to awakening elucidated in this book are very different in tone and could seem oppositional, yet each address and shines a light on different aspects of the human condition, impacting our sense of being a defined separated egoic-self, undermining the centrality of that assumed position, and leading to the realisation of emptiness and its rich diversity.

James Low’s translation of the Dharmapada included here is new and arose from the text brought back from Sri Lanka to Tibet by the Rev. Gendun Chophel in conjunction with interpretations and insights from previous translations including the guide to the Dharmapada in Hindi by Mahapandit Rahul Sankrityayan. This clear and simple rendering can encourage some real thinking around  matters as vital to our future well-being now as when they were originally addressed, so long ago, by Shakyamuni Buddha.

The ultimate realisation is  expounded in the final text. It is the only one written by a woman, Ayu Khandro, and is found at the end of the book as the apogee rather than a token inclusion. Further texts are The Sharp Weapon Wheel by Dharmarakshita, the famous Kunzang Mönlam – The Evocation of Samantabhadra and two shorter Dzogchen text by Tulku Tsulo and Gonpo Wangyal.

The orientation and explanations accompanying each of the translations are easy to follow and invaluable, comprehensive notes further clarify the meaning and intent.

James Low’s translations arise from the dharma, in connection with us at this time, though a lifetime of study and deep practice.

He had the opportunity to clarify his interpretations and understanding with other great teachers for whom the dharma was their life-blood.

So, allied with his facility with the English language, one can have confidence that the translations, although being as he says ‘provisional in nature’, reliably accord with and express the meaning intended to be conveyed.

This is not a ‘page-turner’ of a book but one to stop us in our tracks… each page is an invitation to follow the meaning down through the words to discover the heart and truth of our nature.

This entry was posted in Reviews. Bookmark the permalink.